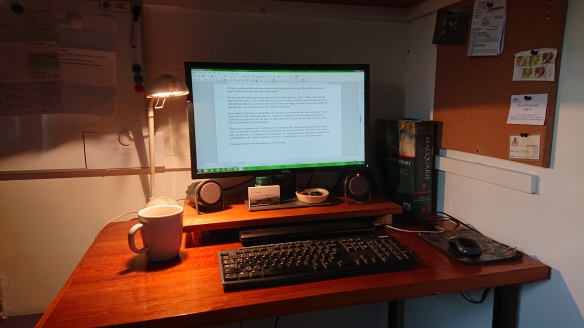 It happens every once and a while. He writes away in his electronic journal, named El-Jo, and a story creeps in and takes over. It then gets cut and pasted into its own file, is given a title, and edited. Later maybe, it gets posted on his blog or submitted to a literary mag, or entered into a competition.

It’s a good habit this writing in a journal first thing in the morning, if there isn’t some other story currently under construction. Don’t look at the internet before doing this, the internet can induce mighty buzzes of anger – which only bring on venting and raving and wasting buckets of time. And what good is that?

There is a bird outside. He’s heard it before. A summer bird. That’s it, fig bird. He pictures its olive plumage and red beak.

His wireless keyboard is dusty and dirty, but how do you clean these things? No, don’t Google that. Not now anyway.

That’s right, there are some bills needing to be paid today. He sets an alarm on his phone to remind him to do it later. Later, after the morning writing session.

He hears a garbage truck and remembers he hasn’t put the bins out yet. Should it be done now in case it comes down the street earlier than usual?

He goes outside and unknowingly steps with his left foot onto one end of a fallen twig from the paper bark tree above. Like an unbalanced see-saw, the other end of the twig flicks up into the air and stabs his right foot as he steps forward. His foot is bleeding, not badly. At least the smelly red garbage bin is out. He goes back to his computer and El-Jo.

He journals in third person, an attempt to get out of his own head and into the never-never world of story which is full of fictional characters waiting to be plucked out of the aether and laid down faithfully and magically onto the page. He likes this world. He gets into the zone when he enters into its mysterious timeless dimension.

Fingers go on automatic pilot. Sentences form, clumsy at first. Random adjectives attach to nouns, some are kept, others deleted. The fig bird and the garbage truck fade out. The bills and their due dates are nowhere to be found in his writing mind. The slight throb in his right foot is washed away by a splash of dopamine. He could be anywhere, in any era, of any gender, race, or sexual preference. Anything could happen.

Nothing else matters, for the moment, on this morning. 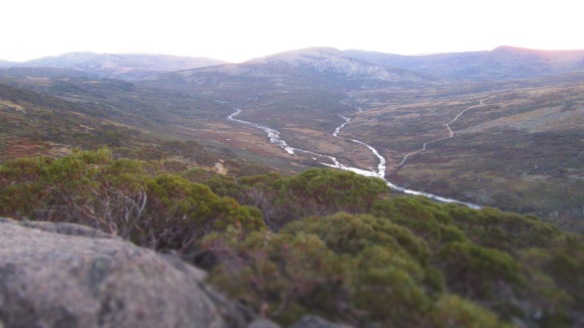 I just put a jacket on. It’s cold again. Winter is having a few last laughs while we ponder a future world cooked by a carbon dioxide soaked climate. The weather, always on our minds.

When I’m one hundred and ten and the young folk ask me what it was like when modern civilisation was in full swing, I’ll tell them, “They were anxious times.”

Not long ago, I was thinking that the time was ripe for some new form of literature to appear on the scene – that the novel, novella and the short story had possibly run past their use-by-date. Of course, there is flash fiction. So quick and easy as we rush around in this busy world. But, is flash just fashion? A flash in the pan?

One other new trend, a genre named ‘cli-fi’, is speculative fiction set within the post-modern-civilised-world of the near future that has been ravaged by climate change. Not having read any of this new genre, I assume that some works of cli-fi paint the future as a pure dystopian hell, while others inject doses of hope into the hot and humid chaos to console our anxious souls. Maybe some of the better examples of cli-fi simply explore the perennial universal aspects of the human condition in this new paradigm where hunting and gathering and small scale horticultural activities have by necessity returned to the daily routine.

However, will there be a new movement, and not just some new trendy commercial genre, but a whole new literary form and style that will inform and enlighten the masses as to the reasons why everything in this world is so confusing and frustrating and unfathomable? Will literary fiction be able to evolve in a new direction that will supplant our current obsessive bingeing on an endless stream of multiple seasons of multiple episodes of escapism currently available at the touch of several buttons on the remote control in our living rooms?

Will it be that this new age of literature only comes into existence when the high-tech dependent mediums go out with the lights? Who knows?

The reality we are facing is one where the world becomes an absolutely horrible place to live in, with millions, if not not billions, of people suffering and dying. Will any of us, when the shit really starts hitting the fan, have the luxury of indulging in the pastime of reading? And what about writing? Will the only relevant literature produced in these times of collapse be works extracted from the ruins, such as the diaries of the those who managed to find a pen and paper, and some space and time and peace, to be able to record first hand accounts of human suffering on a scale which has never been seen before?

Or, will the collapse of civilisation be slow and whimpering and, therefore, a substantially long enough era that will sustain a thriving culture of writing and reading? A literature that will portray humanity in the throes of decline, be they times of joy or mayhem, or both. At some point human civilisation, if our species does survive, will be kicking off once again. And will this new literature be a blueprint of salvation for this next civilisation? Will humanity ever learn the lessons required to ensure that a sustainable existence cannot not ignore the limits to growth on a finite planet?

In the meantime, what stories should we be telling each other? Surely, the classic hero’s journey, or the Bildungsroman, or the stock standard three act drama of rising conflict to climax and denouement, are ultimately irrelevant when the largest human civilisation ever to exist on Earth is collapsing. What is the point of self discovery, or battling evil forces, or correcting systemic injustice, when the reality is that the world as we know it is falling apart around our ears and in front of our eyes?

What stories should we be telling each other in these anxious times?