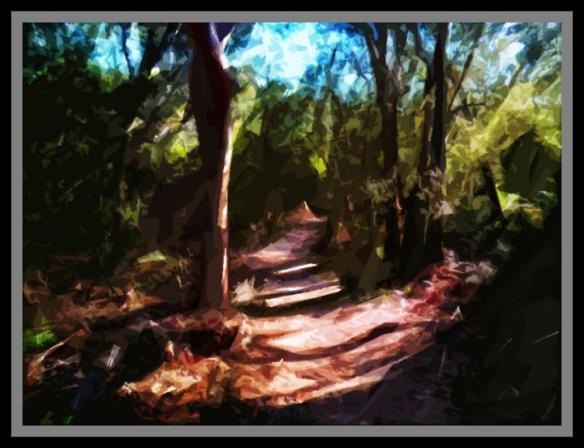 Davis and I are making a track. We’re doing it with our feet, no tools needed. It’s the path we take each day as we wind our way from the back gate down to the rock platform up the north end of the beach we call our own. Our footprints on the sand rarely last a day, but the ones across the grass, and through the low heath, and under the forest canopy, are doing their work. The track gets more obvious, little by little, day by day.

We take this route because if we go by the road way we have to drive, or if not drive, wear shoes on the hot tar, and we end up down the south end where the people are. We also like the birds and the lizards and the snakes we come across. Nature is healing us both.

I call him Davis because he once was my boss and Paul sounds weird to me for some reason. He’s always been Davis and he seems OK with it staying that way – even after all the shit that went down. We’ve changed the setting not our relationship.

When we do hop in the car, to drive to the shops for food, the locals wonder who the fuck we are. Davis is a heap older than me and even though I’m quite androgynous, I am clearly a young Asian woman, so the usual conclusions are made. If you look closely though, and if you have what some people call a ‘gaydar’, you’ll know there’s nothing going on between us – well not in that sense anyway.

We work on our track every morning unless it’s storming. And if the wind’s not too wild in the afternoons we go again. Davis sometimes brings a torch when we do the afternoon beach thing. The sunsets can be so nourishing that we sit on the dune and just bathe in the dying day. Davis teaches me astronomy.

“Oh yeah, the line the sun takes from sunrise to sunset.”

Davis has a gender for lots of things. Bottles are always a he. Trees are always she. And cars, well they can be either, but you’d never guess which ones he assigns as girls and which ones get the boy names. It’s purely arbitrary he explained to me once. The ecliptic is female by sheer randomness. I don’t think he’s ever called the track male or female, it’s just the track.

Davis used to talk a lot about politics and history, it was why I hung out with him at work. The tearoom was full of ladies comparing lunches and waistlines. Out the back, he and I sucked hard on full strength cigarettes and vented our anger at the craziness of everything. Food could be scoffed at your desk, later. He has an amazing knowledge, broad and general, big picture stuff, but when he needs a detail like a number, or a date, or a scientific name in Latin, he’s got it – right there in that bald head of his. Work was great fun back then, with Davis.

After he blew the whistle, after he’d been chewed up and spat out by countless hearings and court cases then sent on his way with a suspended sentence, he almost stopped talking completely. I tuned into events on the computer at work, sneaking onto the alternative news websites. Some commentators cheered him on while others saw just another opportunity to propose a conspiracy theory. That was a tough eighteen months. He texted me to say it was best if we ceased all communications for the moment. I texted back ‘K’, and cried.

The day after the judge handed down the final verdict and it was clear that he was not coming back to work, not here anyway that was for certain, nor anywhere else perhaps, he texted me to say he was leaving the city. He had a house lined up down the coast. Miserable and lonely at work and sick of trying to find comfort with a woman – funny how I hate lesbians even though I am one – I asked him if I could come.

Does everyone wake up earlier and earlier as they get older? I’m now getting up regularly not long after sunrise. I remember having to set the alarm to wake any time before nine. Davis gets up in the dark. I asked him once, “So what time do you get up, Davis?”

I didn’t have to ask what he did. I knew that. He was reading and making notes in cheap exercise books that he bought from the smelly two-dollar shop in town. The third bedroom was his space, a study of sorts, and it was a girl.

“She likes books and paper and pens,” he said one morning out of the blue as we worked on our track and got wet in a drizzle.

“The study. She’s a bibliophile.”

When we first moved in I asked him if he wanted to talk about all the madness that erupted after he blew the whistle.

“I’m a good listener Davis, you know that. I can smoke three Camel before I get a word in.”

“All talked out, Lily, all talk out. Let me just say, I wasn’t prepared … not by a long shot.”

I gathered our stay in the bush down the coast near the beach, with his pre-dawn sessions in the female study, was preparation. Books came by the score in the post every week, and I helped Davis make shelves out of fence palings and bricks that we found lying around the messy yard. The study, she was looking good, one whole wall ended up as books from floor to ceiling. I took some pride in the fact that I introduced Davis to 0.7 gauge gel rollerball pens.

He stuck with the cheap exercise books though.

“He’s a bit fancy,” he said when I gave him a blank journal with thick paper, hard bound and all. “Not sure what I’ll write in that.”

At least it stayed sitting on his desk. Waiting maybe, for when he was prepared.

It took about a year for me to exorcise the raciness that the city had planted inside me without my consent. Davis reckoned he got rid of most of his poison during the eighteen months sitting by himself on benches outside hearing rooms and court houses.

With the raciness gone, life began to fill with the simplest of things and moments.

I collected stuff from along our track and from off the beach. The beach was different everyday and you never knew what the sea would offer up. When he’d see me stoop and pick up something, Davis would say, “He’s a goodun,” or, “She’ll work well on that necklace you’re stringing.”

After two years our track to the beach was bare dirt in some places. The chocolate coloured patches in the green and yellow grass were cool in the mornings and warm on the sunny afternoons.

The day he said that we went into town. We never really got to know anyone there. And Davis and I, the bald bloke in the sarong and that funny looking Asian dyke, were still a mystery to the locals – but at least they’d given up gawking and silently guessing. After we got our usual supplies, Davis headed down to the local electrical appliance store that surprisingly had not closed down like a lot of the other shops. He bought a radio. It was a plug-in one. So the batteries he bought as well must have been for the torch.

When we got home he put the radio on our op-shop dining table. He plugged it in and tuned it into the ABC.

“He’s a bit crackly, but she’ll do,” said Davis. Never thought I’d be introduced to a hermaphroditic radio and not even blink an eye.

Davis then went into the study and came out with the blank journal I had given him and a gel rollerball pen.

2 thoughts on “The Track”